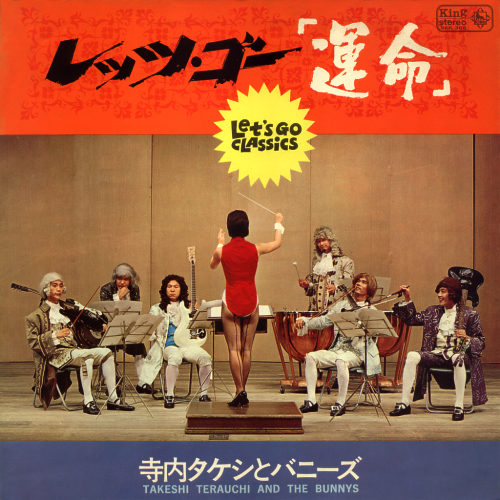 Real funny gatefold sleeve on this 1967 guitar instro platter from the Japanese guitar hero Takeshi Terauchi.  He's also known sometimes as just T. Terauchi or Terry, as in Terry and the Bluejeans.  He has TONS of great instro records, sort of like the Japanese counterpart to the Ventures, and no doubt influenced by the Ventures.  But he also has a definitely recognizable style, and there are influences from traditional Japanese stringed instruments in his playing too.  So, the music on this LP is guitar instro versions of classics from Swan Lake and Fur Elise to "Danube Wave Waltz."  In their "classical" garb above, Terry is the one with the dark wig and the white guitar.  Whatta sound too - 3 guitar attack, plus organ bass and drums!  A giant "domo arigato" to Naomi Chihuahuaplanet for enlightening my record player with this one!  Very funny cover, and good music too!

Bonus pic!  Check out the flip side of the same LP gatefold sleeve!  This is "the real" T. Terauchi and the Bunnys. 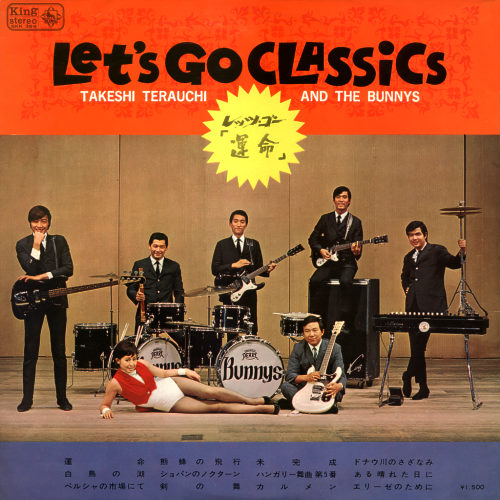